I created the guide for designers and engineers to get emojis into the product and push notifications for the first time. 🎉

When I started at Uber Eats, we were told emojis couldn’t be used because they broke the code. This didn’t seem right, so I dug in a little bit and found out the issue was actually the localization tool didn’t support emojis. The people translating would see “{emoji}” and have no idea what they meant, so emojis had been forbidden everywhere. How could we solve this 🕵🏼‍♀️?

I worked with a few engineers to create the first half of this guide, which gives specific examples right from the code. This was for two reasons. First, there were some quirks in how to do it, and I found myself connecting one engineer to another for help🙋🏻‍♂️👩🏽‍💻. If they couldn’t get an answer, the emojis would be left off, and it was hard to make the case in QA to take the time to add them back in.

Second, the idea that emojis were forbidden was so deeply ingrained that even when I handed copy docs to engineers, they’d often come back with an answer that emojis weren’t allowed 🙅🏻‍♂️. Writing a guide and giving it a nice layout, date, and examples made it a formal document. I’m not above creating a style guide so I can reference it in meetings five minutes later! Creating documentation is part of our role as UX writers, proof of our expertise, and it puts our partners at ease.

For the bottom section dedicated to writing the strings, I worked with the localization team. This way they were aware of what to expect, and could give us guidance such as creating a DNE (Do Not Emoji 😋) list of emojis that had sensitive culture meanings. The audience for this document was anyone who created content for the product, which could be writers, designers, product marketing, and operations.

This was a document that, once I created it, had about 7 people in at any given time, most of them engineers. It’s a great example of building a style guide with an audience outside just writers. At one page, it’s manageable and meets everyone’s needs. It’s also an opportunity to encourage partners by giving them credit 🙌🏼 🙌🏾. I thanked the engineers by name in the doc and sent emails to their managers recognizing their collaboration with the design team. Finally, I always add a date and owner, as a best practice in content governance. 😎 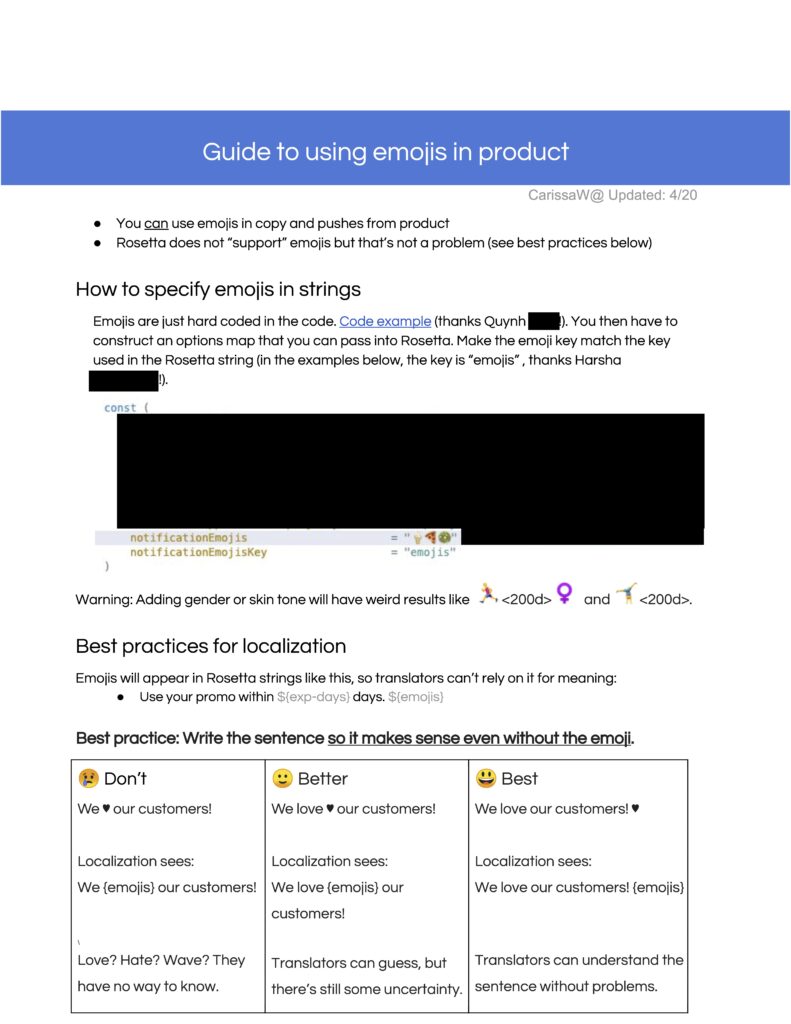